Creative thinking is the ability to think differently and provide new angles and perspectives. It helps people invent, problem-solve, create and communicate in new ways. It is much the same as ‘divergent’ thinking and is often referred to as ‘thinking outside the box’.

The need for creative thinking arises because of the thinking ‘short cuts’ we often take. Once we have a piece of information, we tend to use it again: that’s how we learn. This has huge advantages – for example, it means that we don’t have to learn how to hold a pen every time we write – but it also has some disadvantages, in that we tend to stop thinking about things that we do, see or say regularly.

Creative thinking is distinct from critical thinking. However, the two are often inextricably linked. Indeed, it can be useful to think of them as a binary pair: logical (critical) and intuitive (creative); sequential thinking and insight thinking; analysis and synthesis; convergent and divergent; evaluative and generative; division and integration.

Some of the principles of creative thinking include:

Say, for example, your students started with the concept ‘communication’ at the beginning of a Learning Challenge session. You then helped to create cognitive conflict in their minds so that they are now in the Learning Pit. At this point, you could use these creative thinking steps, each one corresponding to the four principles shown above.

Sticking with the example that your students are thinking about the concept ‘communication’ you could give them one of the following scenarios and ask them to come up with as many possibilities as possible:

Imagine we live in a dystopian world in which communicating with your friends is a crime: what would you have to do – or not do – to avoid breaking the law?

Imagine meeting aliens that can’t see, hear or read – and are poisonous to touch. How could you communicate with them?

Imagine being paid according to how successful you can communicate with others. What would you do to become the richest person in the world?

Imagine NO forms of language exist.  Is it still possible to communicate? If so, how?

This step is more problematic to illustrate because it relies on responding to the ideas your students come up with. However, let’s imagine you’ve chosen ‘idea two, option three’ above (being paid according to how successful you can communicate with others) and, as a result, your students come up with these ideas:Use emojis to communicate with people who don’t speak the same language as you

A group of teenagers came up with these ideas (which probably explains the voguish references!). I helped them collate and review the list. What we noticed was that all their examples related to ‘understanding one another’. We were then able to shape these ideas to fit the context – in this case, the context was trying to decide what is meant by ‘communication’. Thus, this creative thinking activity – although it seemed to be a diversion at first – helped these students to clarify that, by communication, they didn’t mean just transmitting or receiving messages but understanding those messages. Thus, they concluded, communication is not the same as speaking, listening, writing, reading, etc. but is about understanding, comprehending and interpreting.

4.  Use diverse and unrelated data

Again, sticking with the same group of teenagers thinking about ‘communication’, these are the random terms I offered them by way of ‘diverse and unrelated data’: courage, evidence, fame, happiness, nation, poem, story, talent, zoo. I then asked them to spot links between any of these terms and ‘communication’. This is some of what they came up with:

Communication and courage – it can take courage to communicate in some situations. For example, approaching someone famous or someone you fancy; speaking to lots of people at the same time; trying to communicate in a language you’re not very fluent in; telling your family that you’re gay; admitting a mistake, and so on.

Communication and zoo – people who work at zoos often learn how to ‘read’ animal body language and behaviour (this is not the same as communication but it’s part of it); zoo visitors often try to communicate with monkeys by making facial expressions, imitating them, and talking to them. However, they don’t do this as much with other creatures (such as spiders, fish, or tigers) so perhaps we are more likely to attempt communication with beings with similar characteristics?

Although at first the idea of considering unconnected terms seemed like a distraction, it’s interesting to note what those comparisons led to. Indeed, these students were pleased – when reflecting back – to have come up with the notions of communication needing courage (at least to initiate it) and that we are often likely to communicate with those with which we have some similarity or rapport.

All of these examples can be summarised as ‘ways to generate lots more ideas.’ For it is, as Linus Pauling (1901-1994), a double Nobel Laureate, chemist, biochemist and peace campaigner once said:

“The best way to have a good idea is to have lots of ideas.”

Once upon a time (in a land far away), I studied lateral thinking with Edward de Bono at the University of Malta. That lectures finished at midday, giving us long, sunny afternoons to explore the Mediterranean island had nothing to do with my decision to attend the course. Honest.

It’s fair to say though, that Professor de Bono is regarded by many as the founder of ‘lateral thinking’, a term used to describe a set of processes to help think in innovative ways. He divides lateral thinking into four categories:

De Bono’s best-known techniques are Six Thinking Hats and PMI (Plus, Minus, Interesting). These are described in brief below. If you find them useful then I thoroughly recommend finding out more from one of de Bono’s 62 books.

All too often, dialogue can descend into an argument between people holding opposing views. Instead of trying to better understand each other, or consider the potential value of ideas, time and energy can be wasted on trying to ‘win’ the argument or defend a point of view. De Bono suggests that it is far more effective for everyone to ‘think in parallel’ – that is, to think together rather than against each other. To help with this, he introduced the idea of Six Thinking Hats in 2009.

Each hat represents a different perspective. Everyone should ‘wear’ the same hat at the same time. So, for example, everyone ‘puts on’ the white hat to collect together all the information, facts and data available. No one engages in debate or defence; this is an information-gathering technique. Then everyone ‘puts on’ the red hat to share how they feel about the information; no justifications needed, and no challenges permitted: this is thinking together, not against each other. 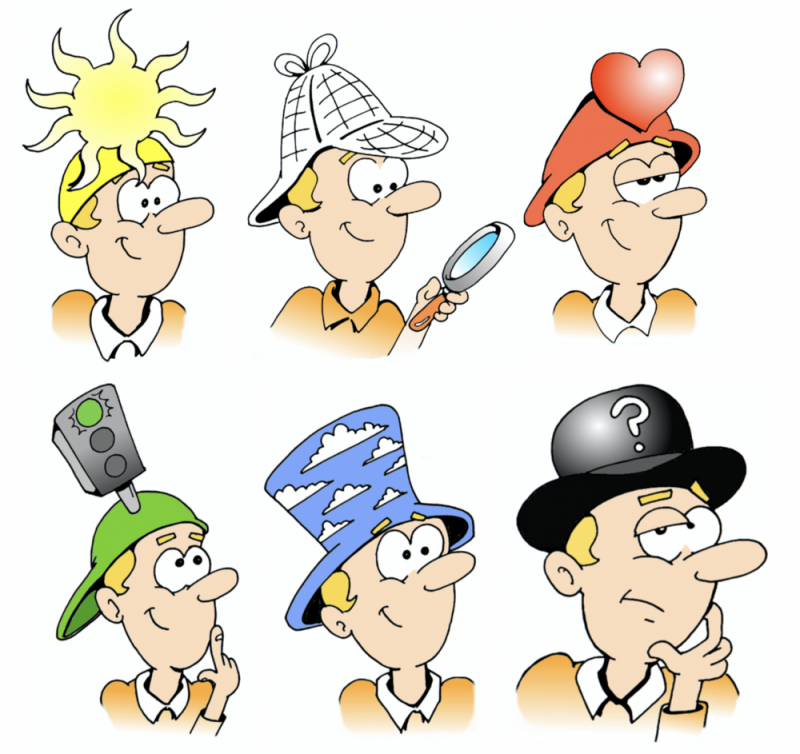 I commissioned these cartoons in the early days of my consultancy life. You are welcome to high-res versions of them if you would like to use them with your students. Just get in touch with the Challenging Learning team to request the files!

Yellow Hat: focus on the benefits, the plus points, and the positives.

White Hat: gather together the facts, information and data.

Blue Hat: focus on the big picture, the direction, and the management of the whole process.

Black Hat: think about the risks, the cautions and the warnings.

The six hats can be used in different orders and combinations depending on the individual situation – so long as everyone ‘puts on’ the same hat at the same time. For example, you might start with the white hat so as to gather all the information before collecting together the benefits (yellow hat) and cautions (black hat). Or you might feel it is better to share feelings first (red hat), then focusing on the direction and purpose (blue hat) before moving onto the yellow hat, white hat, green hat, and then finally the black hat to check for any risks or downsides.

As you might imagine, de Bono’s Six Hats lend themselves very well to the process of constructing meaning and therefore, climbing out of the pit. For example, if your students are struggling to make sense of the concept ‘telling lies’ or ‘social media’, you could give them time to think through their ideas using the hats. If I were you, I’d set a time limit of (for example) 4-5 minutes per hat and then collate everything they say so that their ideas can be compared side by side afterwards. From these ideas, patterns or connections will probably emerge that can help to bring clarity or a sense of priority.

Plus, Minus, Interesting (PMI)

If time or context doesn’t lend itself to the Six Hats, then de Bono’s PMI strategy – which in some ways is an abbreviated version of the Six Hats – might suit your purpose better. It is still a ‘parallel thinking’ strategy and should therefore be run with each participant thinking from the same perspective at the same time, as follows:

You can use a PMI in just a few minutes, whereas the Six Thinking Hats needs at least 20 minutes to use properly. As such, PMI is a really nice creative thinking strategy to use at any point in the Learning Challenge journey. More often, I would be inclined to use a PMI to generate more ideas in the pit, or to help my students group or categorise their ideas to help them climb out of the pit, but nonetheless, the strategy can be used at any point in the proceedings. Indeed, as well as a way to take students further into or out of the pit, it is a particularly effective reflection tool to use when students have come out of the pit and are thinking back over their learning journey.

Other de Bono tools that are favourites of mine include PO – Provocative Operations – and TEC – Target Expand Contract. You can find out much more about these in his books and online courses.

Previous Topic
Back to Lesson
Next Topic
Login
Accessing this course requires a login. Please enter your credentials below!
Lost Your Password?