It is generally agreed that the modern critical thinking tradition derives from the work of the American philosopher, psychologist and educator, John Dewey (1859–1952). He called it ‘reflective thinking’ and defined it as:

‘Active, persistent, and careful consideration of a belief or knowledge in the light of the [evidence] which support[s] it and the further conclusions to which it tends.’ (Dewey, 1909, p. 9.)

The important aspects of this definition include:

Critical thinking should involve ‘persistent and careful consideration’. Rather than the unreflective thinking we all engage in at times – for example, jumping to conclusions or making snap decisions – we ought, instead, to stop and think when the opportunity affords it. Of course, sometimes we need to decide quickly, or the issue is not important enough to warrant careful thought, but there should be many times in which we practise careful and persistent thinking – and where better to do this than during a Learning Challenge session?

Perhaps the most important aspects of Dewey’s definition are the ‘[evidence] which support[s] it and the further conclusions to which it tends’. This, in part, explains the huge importance of ‘reasoning’ in the critical thinking tradition. It means giving reasons, evaluating reasons, checking assumptions and implications, making connections and so on. If a class of students were engaged in critical thinking, they would be encouraged to test whether or not conclusions are supported by reasons rather than wondering whether they agree with those same opinions. For example, if a boy said, ‘Girls can’t play football,’ a group of critical thinkers would be expected to ask for his reasons rather than to simply argue against his point of view. In practice, this might sound like this:

Student A: ‘What makes you say that?’

Student C: ‘If we think of something that you’re good at – let’s say, playing the guitar – does that mean all boys can play the guitar?’

Boy: ‘OK, so girls can play football, but my sister doesn’t.’

Teacher: ‘That was a really good example of checking whether or not reasons support conclusions. In this case, we found that they didn’t. What other ways could we have challenged or questioned the first statement?’

Student E: ‘We could have pointed to contrary evidence – for example, there are many female professional soccer players; or pointed to the FIFA Women’s World Cup.’

Student F: ‘Or, we could have asked what was meant by ‘can’t play’. For example, does it mean, ‘chooses not to play’, ‘is physically incapable of playing’, or perhaps ‘has never had the opportunity to play’?’

Does this interaction seem like anything that might take place with your students? If it is, then I would say it is a good sign (though not proof!) that they are engaging in critical thinking. The important factor is that the emphasis is not on deciding who is right or wrong, who has the strongest point of view, or indeed whether or not participants can agree with each other. Instead, the focus is on determining if the reason(s) given support the conclusion – in this case, whether the reason that one girl can’t (or chooses not to) play football is a good enough reason to support the conclusion that ‘therefore, all girls can’t play football’.

Of course, this is just one example of critical thinking. However, in my experience, a focus on reasons is a really good place to start if you wish to develop critical thinking. Indeed, I like to introduce sessions on critical thinking by adding a hyphen to the term ‘reasonable’ so that it becomes ‘reason-able’ and then explaining that reasonable behaviour comes from being ‘able to reason’.

A focus on reasons also lends itself really well to guiding your students to think through some really important issues that are often out of bounds in a school context. I’m thinking particularly of racism, sexism, and ableism, as well as any other topic that is important for students to understand in a multicultural, pluralist society but which teachers often shy away from because of the sensitivities surrounding the issues.  This quote that does the rounds on social media from time to time seems appropriate in this context:

The example about girls playing football was a fairly tame one because most students in that class of Year 5s (9-10-year-olds) already knew that girls can play football. It is a different matter though if the differences of opinion come from deep-seated beliefs, dogmas, or long-held prejudices. Add into the mix some unsavoury – or at times, taboo or even illegal – assertions and no wonder most teachers would prefer to steer well clear of these topics.

Personally though, I would much rather students engaged with these sorts of topics within the safety and supportive culture of a classroom than be left to engage with them, unsupervised, out in the ‘big bad world’.

To prepare for this, I would strongly recommend that you get into the following habits:

Use critical thinking to analyse ideas

Use critical thinking to analyse ideas

Following on from the last point, it is also important to use this reasoning approach with innocuous topics as it is with the sensitive ones. That way, your students will come to realise that when you question them, you are inviting further thought and explanation rather than trying to change their minds or imply that they are wrong.

So, even if one of your students says something as mild as, ‘Shakespeare plays are boring,’ or ‘The sciences are more important and harder than the arts,’ then still ask them to support their opinion with a reason rather than laugh the comments off or respond with counter-opinions. That way, your students should become so used to you asking for reasons that they will expect you to challenge all opinions – including those based on dogma or inherited prejudice – without wondering if you are implying their family’s or community’s point of view is false.

Another benefit to this approach is that ‘-isms’ such as sexism, racism, classism and so on, or phobias such as homophobia and xenophobia, never stand up to the scrutiny of reasoning. Once prejudicial claims are examined, it becomes clear they are based on misrepresentations, gross exaggerations or generalisations from limited sources. This, in turn, leads to people asserting these prejudices less often – because they are now less certain of them – which then makes it less likely that impressionable (young) people will pick them up. Okay, so it’s not going to change the world overnight, but we’ve got to start somewhere – and where better than in our classrooms?

There are many actions involved in critical thinking. The main ones, as they apply to the Learning Challenge, are as follows: 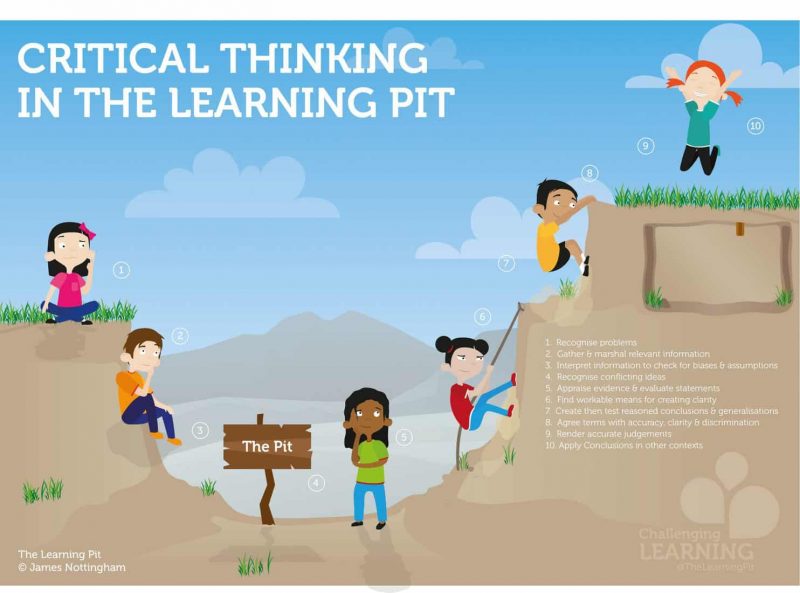 Questions You Could Ask to Encourage Critical Thinking

At the end of the last module, I echoed my colleague Martin Renton’s point about ‘questioning’ being more important than ‘questions’. It is your intention – and the process you use – that are likely to have more influence on outcomes than the individual questions you ask. So, for example, using phrases such as ‘Interesting…’ or ‘Go on!’ to encourage further thought may well be more effective than classic questions such as, ‘What are some of the assumptions we are making here?’, particularly if you have an intention to deepen the inquiry in the first situation but not in the second.

If, however, we take for granted that your intentions are to deepen the inquiry and the process you are using is investigative and exploratory, then the following questions should encourage an emphasis on critical thinking.

Thinking about the trustworthiness of sources is a classic first step in critical thinking. For example, are your students recalling information that is reliable and verifiable or is it hearsay, fake news or prejudice?

2. What's another way to look at this?

Looking at ideas and issues from multiple vantage points is often thought of as important ways to develop empathy. The strategy can also help to build critical thinking by showing that conclusions are often a matter of perspective.

3. Why is this important? (Or why does it matter?)

Tone of voice is always important, and even more so with this example! Asking the question in the right way should encourage your students to think about implications, relevance, connections and context – all of which are important in a critical thinking context.

4. Can you give an example? (Or counterexample?)

Creating an example – or drawing on an experience by way of example – is an excellent way to illustrate a point, add meaning, and/or clarify key points.

Reputedly, Einstein said that if he had just one hour to solve a problem, he would, ‘Spend 30 minutes analysing the problem, 20 minutes planning the solution, and 10 minutes executing the solution,’ and Abraham Lincoln said, ‘Give me six hours to chop down a tree and I will spend the first four hours sharpening the axe.’ Whether or not these are direct quotes is disputed but nonetheless, the sentiments are clear – spending time analysing a problem before engaging in solutions is time well-spent. Indeed, this is perhaps the strongest feature of critical thinking: to inquire into the basis, provocation and/or implication of an assertion rather than to respond with an agreement or disagreement.

Construct coherent lines of reasoning collaboratively as well as individually

Construct coherent lines of reasoning collaboratively as well as individually

As with most aspects of education, outcomes matter more than the inputs. Teaching is important, but our students’ learning matters more. We expect our teaching to lead to learning, but we know it doesn’t always – certainly not for all students all of the time. Which is why we should pay particular attention to the learning outcomes. That’s why this Academy includes descriptions of expected outcomes as well as an invitation to regularly check on the progress your students are making.

As for the outcomes of critical thinking, this is what I would expect my students to do more and more:

Previous Topic
Back to Lesson
Next Topic
Login
Accessing this course requires a login. Please enter your credentials below!
Lost Your Password?